I’ve published my first word game wordfight inspired by venerable Letterpress. It’s a game where players make up words from the letters on the board. Whoever takes the most letters wins once all the letters are taken. 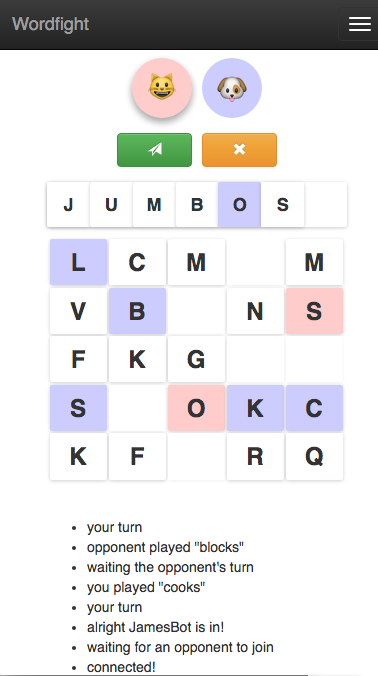 The idea has been in my “todo” for few reasons:

This is a typical CS problem where data structures and algorithms matter. Running it on a small VPS sets certain requirements on memory consumption and performance characteristics.

I’ve been mostly doing backend. The times when I had to build a UI jquery would be my tool of choice. This project could be built with jquery as well no problem but I wanted to try reactjs.

Surprisingly using reactjs with create-react-app was pretty seamless experience. I didn’t have to get into a rabbit hole of setting up webpack and configuring millions tools required to trans-pile, minify html, js, css.

I still have to figure out what’s the testing process, but I’ve achieved my main goal: to prototype an app with reactjs without getting lost in nodejs’ configuration land.

When there’s no-one to play with bots come to the rescue. Right now the bot is quite naive and picks words and letters randomly. While it works as a prototype there’s definitely a strategy to winning a game by picking certain letters at certain locations. So there are different levels of AIs that could be built, which I’ll be experimenting with.

It uses “roulette” style player matching: from all the connected participants a random pair of players are matched together to start a game.

Backend is done with Golang and it turned surprisingly simple.

Usually I’d open source all my work but for small projects like this it just not worth it: